Protect Zangle Cove and the Coalition to Protect Puget Sound Habitat filed suit today against the Washington Department of Fish and Wildlife (“WDFW”), demanding an end to the improper exemption of industrial shellfish aquaculture projects from state standards designed to protect fish and marine habitats.

Most construction projects in or near Washington waters must receive an Hydraulic Project Approval (“HPA”), which requires that they have safeguards in place to protect fish and their habitat. WDFW has exempted commercial aquaculture from this statutory requirement for many years, meaning aquaculture projects go forward without these crucial environmental safeguards.

The lawsuit filed in Thurston County Superior Court contends this exemption has no legal basis, and asks the court to direct WDFW to apply the HPA law consistently to shellfish aquaculture projects. The suit also asks the court to halt development of a geoduck farm planned for Zangle Cove, a near pristine estuary in South Puget Sound, until it receives an HPA permit.

“With threatened Southern Resident killer whales and endangered native salmon at extreme risk, our state agencies have failed to implement the environmental protections that are critical to the broad scale ecological recovery of Puget Sound,” says Patrick Townsend, president of Protect Zangle Cove. “The action we are taking today is one important step toward restoring sanity to the recovery process. We must protect the tidelands from further loss of ecological function or we will see the loss of iconic species so important to the people of Washington State.”

Laura Hendricks, director of the Coalition to Protect Puget Sound Habitat, emphasizes that the lawsuit only asks the state to apply the law consistently.

“There is a double standard that exempts commercial shellfish aquaculture from the state HPA permitting system, even though these operations pose a severe threat to our fragile coastal habitats,” Hendricks says. “A private citizen installing a small dock needs to get an HPA permit, but a commercial shellfish facility would not need an HPA permit for the exact same project—or before constructing a facility that disrupts miles of pristine shoreline, destroys natural vegetation and aquatic life, and inserts tons of plastic tubing, netting, and rebar into the tidelands.”

Commercial shellfish aquaculture is in the midst of dramatic expansion in Washington. These factory-farm like facilities already take up as many as 50,000 shoreline acres, or as much as one-quarter of all Washington tidelands. Significant expansion is planned in the immediate future, focusing largely on geoducks raised to sell in the Asian luxury market.

A single-acre geoduck farm operation usually includes around 44,000 PVC tubes, four- or six-inches in diameter, and approximately ten inches long. This amounts to approximately seven miles of PVC tubing per acre, weighing between 11 and 23 tons. Plastic nets are typically installed over the entire geoduck bed to keep out native wildlife that would normally feed and shelter there.

Jim Brennan, a marine biologist who has studied Puget Sound for 28 years, including five years with WDFW’s Habitat Program, says that the shellfish industry has long been shown “favoritism with exemptions from standard environmental review and permitting.”

“Tens of thousands of acres of tidelands have already been converted from natural aquatic areas to industrial aquaculture feedlots, primarily cultivating non-native species and intensive monocultures. The environmental risks and damages are similar to pen-raised Atlantic salmon and other types of shoreline modifications. Yet, the impacts are not being adequately evaluated or mitigated,” Brennan says. “While federal and state agencies, environmental and citizen groups spend millions of public and private dollars each year on salmon recovery and restoration projects in Puget Sound, the shellfish industry profits from damaging the very habitat and species we are attempting to protect and restore.”

“I doubt that we will restore Puget Sound ecosystems or recover endangered salmon and orcas if we continue to allow unmitigated impacts from rapidly expanding industrial aquaculture. We strongly regulate other modifications of our shorelines, such as bulkheads and overwater structures. Why not aquaculture?” he asks.

Protect Zangle Cove and the Coalition to Protect Puget Sound Habitat are represented in the litigation by the law firm of Lane Powell P.C.

To view the complaint filed today, visit http:/ProtectZangleCove.org/Assets/Complaint-complaint-complaint. For more information about the impact of commercial shellfish aquaculture, visit www.protectzanglecove.org or www.coalitiontoprotectpugetsoundhabitat.org.

Protect Zangle Cove is a nonprofit organization consisting of citizens who reside on the shores of South Puget Sound. Our mission is to protect the tideland of Zangle Cove from industrial geoduck aquaculture, preserve the critical habitat of Puget Sound tidelands, support the protection and restoration of eelgrass on Puget Sound tidelands, educate citizens about nearshore habitat, inform government officials about the problems from industrial shellfish aquaculture, and encourage rulemaking to protect Puget Sound shorelines for the enjoyment of citizens and for native species that make their homes here. 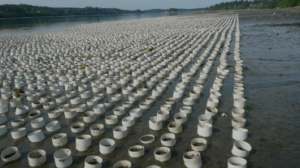 The Coalition is an alliance of citizens, environmentalists, scientists and recreational users concerned about industrial aquaculture and its impacts on plants, animals, and ecological functions. Our mission is to voice citizen concerns about industrial aquaculture and its adverse impact on the health and quality of Puget Sound and coastal waters, to effect changes in policies and regulations, and to encourage enforcement to protect shoreline habitat.

Photo courtesy of the Coalition to Protect Puget Sound Habitat
A typical commercial geoduck facility, which uses approximately seven miles of PVC tubing per acre, weighing between 11 and 23 tons